Every single Buffet Service menu on our Restaurant Menus guide is now fully up-to-date with the latest November 2015 prices and options. This includes the newly refreshed Plaza Gardens Restaurant offering, which now serves a new selection of hot meats amongst other improvements. END_OF_DOCUMENT_TOKEN_TO_BE_REPLACED

Here are our five favourite restaurants for fast food at Disneyland Paris, highlighting the counter service restaurants with the best menus, themes and value for money across the parks and resort. END_OF_DOCUMENT_TOKEN_TO_BE_REPLACED

Whether you’re planning to visit Disneyland Paris in September 2015 or September 2016, we’ve got some major Calendar updates on every page to help you plan your trip as far ahead as possible. END_OF_DOCUMENT_TOKEN_TO_BE_REPLACED 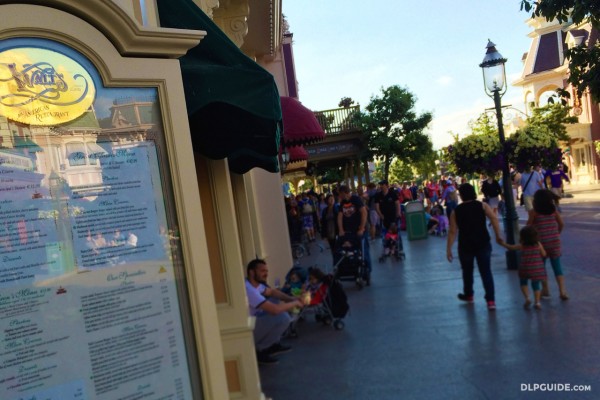 Ever been left feeling hungry with a long trek to the next restaurant because Colonel Hathi’s Pizza Outpost shut up shop? Decided to visit on the one day Walt’s – An American Restaurant doesn’t want your table reservations? Now help is at hand. END_OF_DOCUMENT_TOKEN_TO_BE_REPLACED

Sunday 22nd June was the big day for more than 50 fan bloggers, reporters and tweeters as we were invited to discover not only Ratatouille: L’Aventure Totalement Toquée de Rémy but a special preview meal at Bistrot Chez Rémy and an hourlong presentation on the making of the ride by two of the Imagineers themselves.

Staging an event like this purely for a guest list like us was truly unprecedented by Disneyland Paris, but hopefully its success will see the formula repeated again. Besides word that #Ratatouille briefly trended on Twitter in France, it presented a fantastic opportunity for us to gather as much information and as many photos and videos to prepare our blogs and websites ahead of the official public opening date.

In a sense, for every invitee we could take along another thousand or more diehard fans with us. Keeping the fans “in the loop” like this is good for us and great for Disneyland Paris.

No less than 41 live photos were shared on our @DLPToday Twitter feed, mostly focusing on the restaurant preview with the first pictures of its décor, menus and sample dishes. If you missed them at the time or want to relive it all again, here we go! END_OF_DOCUMENT_TOKEN_TO_BE_REPLACED

Reservations are now open for Bistrot Chez Rémy, the new fully-themed Ratatouille restaurant at Disneyland Paris, and yes — there’s ratatouille on the menu!

Pricing details have also been revealed, with a standard set menu starting at €29.90 for a starter and main course, or €39.90 for a starter, main, dessert and drink too. A children’s menu is said to cost roughly 17 euros.

And the menu itself? Mais, bien sûr…

A vegetable soup could replace the salad starter in winter.

Located next door to and within the same building as the attraction Ratatouille: L’Aventure Totalement Toquée de Rémy, with views through to the ride unload area, the “upscale but light-hearted” new dining location takes the theme not of Gusteau’s or Le Ratatouille but Rémy’s more fun bistrot up in the rafters, as seen at the end of the film itself.

Despite that backstory, this won’t be a character dining location — no appearances by Rémy and Emile are planned. Part of the reason for that will be the quick turnover of tables — as little as 45 minutes is the aspiration. That’s naturally a good thing for Disney, freeing up space for fresh punters in what’s expected to be a hugely popular venue, but also more in line with what most guests actually want: a quick, but “proper” meal, and no hanging around for “l’addition” — the bill — when you want to be getting back to the park.

Bistrot Chez Rémy is the first Table Service restaurant in the whole of Walt Disney Studios Park and — perhaps even more startlingly — the first restaurant of any sort within its biggest land, Toon Studio. A previous Ratatouille “living character” experience at Restaurant des Stars in Production Courtyard, where a miniature animated Rémy figure was presented to tables, has now ended. It remains to be seen what raison d’être that otherwise largely nondescript buffet location may now find for itself.

• Get a taste of the magic before you go: Find Restaurant Menus for every Disneyland Paris location at DLP Guide — look out for a full update of every menu beginning next week!

We all have those odd jobs we never quite get round to and you’ll need to be a longtime reader of DLRPToday.com now to remember the demise of Hurricanes Discotheque back in March 2010. So it’s with some relief that, three years on, we report the unmistakably ’90s nightclub spot in Disney Village is at last being white-washed into the history books.

Signage and exterior decorations outside the first-floor unit have laid dormant since the club was unceremoniously and hastily shuttered just shy of its 18th birthday, surely confusing for casual guests and certainly an eyesore on Disney Village’s main avenue.

The latest photo above by DisneyGazette.fr shows the exterior stripped of its colourful fake palm trees and the stairs repainted in plain white — removing the previous Hurricanes Discotheque branding and slogans. Here’s hoping the tacky beach shack and all other remnants will be removed soon, too.

Below, the venue as it was before, pictured in April 2012.

Current consensus seems to be that the location will become a Cast Member restaurant or break space, a slightly disappointing use for a prime space within Disney Village which would itself still benefit from an improved dining offer. Previous rumours, soon after the nightclub’s closure, were for an ESPN Zone, a new Sports Bar or an Italian restaurant.

At the very least, the cleared ground floor area could be a good space for a small café or kiosk and seating area — perhaps Frank Gehry’s minimalist 1992 vision is due a return?

For almost 20 years, Annette’s Diner has been inviting all of Europe into that most quintessential of dining experiences from across the Atlantic: the American diner. Now, just shy of its own 20th birthday, Annette has hung up her rollerskates for a well-earned rest — and refurbishment. The iconic diner at the entrance to Disney Village closed on 13th March for a refurbishment that will last through until 6th April 2012. In the meantime, hungry burger hunters are pointed to La Grange at Billy Bob’s Country Western Saloon or The Steakhouse, where a special €19.99 beef burger menu is available.

A temporary closure of this popular restaurant has been expected since last July, when Disney took back full control of Annette’s and a few other Disney Village restaurants whose operation had previously been outsourced to a company named Groupe Flo. Back in October, New York Style Sandwiches closed for a similar three-week refurbishment. While the move back to in-house operation is expected to lead to efficiencies and cost savings for Disney, it will be interesting to see if it also leads to genuine improvements in quality and service.

Resort revenues up 4%, attendance up 5%, not a rat to be found in First Quarter 2012 results

Disneyland Paris saw overall revenue growth of just 1% in the first quarter of its 2012 financial year, from 1st October to 31st December 2011. The results, published this morning by operating group Euro Disney S.C.A., make for unremarkable if somewhat reassuring reading given the economic climate. Resort revenues, for Theme Parks, Disney Village and Hotels, actually rose a good 4% in the quarter, brought down for the total figure only by lower real estate revenue compared to 2011. Park attendance itself grew a surprising 5%, due to higher numbers visiting from France itself, perhaps taking advantage of the mild late Autumn for last minute trips, with total Theme Park revenues up 7%.

Philippe Gas, CEO, comments that “improved attendance and guest spending are encouraging, especially in light of the challenging economic environment.”

However, average spending per guest in the parks was up by only 1% and average spending per room at Disney Hotels up only 2%. Total Disney Village and Hotel revenues grew by just 1% and room occupancy at Disney Hotels actually fell by 1.1 percentage points. It seems that, despite continued success in getting guests through the park gates, the resort still struggles at turning these numbers into anything more than negligible increases in revenue, probably driven more by price increases than additional purchases. It has to be said that, for a visitor, the resort’s casual dining fare remains largely out of date and uninspiring, while the merchandise range simply fails to engage for many demographics. At a time when a guest will consider and reconsider every additional purchase on top of their ticket, the resort certainly isn’t doing badly, but it is failing to make many consequential gains.

Nor is the dip in hotel room occupancy disastrous, especially after a sharp (and perhaps, unsustainable) jump of 5.6 percentage points in FY2011. Yet perhaps it reflects a growing feeling amongst visitors that the Disney Hotels do not offer the best value for their money. High standard room rates have combined with aggressive discounting over several years to suggest that “the price on the label” may not necessarily be the price they’re worth. A quick visit to any online trip planning forum will immediately bring up potential visitors merely biding their time for the next “big offer” or “flash sale” — hey, like this one! — which, while useful for propping up numbers, must surely be harming the brand value associated with Disneyland Paris. Will anyone ever want to pay full price again?

Signing off, Philippe Gas mentions only the 20th Anniversary: “In April we look forward to launching our twentieth anniversary celebrations with brand new experiences for our guests, including the Disney Dreams®! night-time show, an innovative light and color spectacular. It will also be
an opportunity to celebrate a two-decade journey with our cast members, our guests as well as our key public and private partners who have helped Disneyland Paris become Europe’s number one tourist destination.” Meanwhile the footnotes include only the same passing mention to the launch of a “multi-year expansion of the Walt Disney Studios® Park, which includes a new attraction.” So, despite construction having begun, no Ratatouille dark ride announcement yet; and all eyes on the 20th…

What’s the one thing Walt Disney Studios Park needs more than a dark ride? This: a new restaurant! While the initial planning notice for the Ratatouille dark ride only noted a project known as “Toon Studio D”, this new full-blown Marne-la-Vallée construction notice, spotted by Mouetto of Disney Central Plaza, confirms that both an attraction and a new restaurant are on their way to the park. For the Studios, this is a big deal: the park only has three true restaurants to its 17 attractions, even including the minuscule Café des Cascadeurs. This will also be the first real dining location in the whole of Toon Studio — the park’s largest land, taking up the whole of its right side.

Don’t let the French theme lead you to expect a traditional Bistro de Paris-type dining experience here, though. As we teased earlier this month, we’re more likely in fact to be dining in a giant-sized version of Rémy’s rat restaurant, perhaps on the first floor of the new showbuilding’s frontage. This would allow Imagineering to create something truly unique and fun with the theme — after all, if you want a traditional, stuffy Parisian restaurant, there are plenty just a short RER ride away.

Surprisingly, with the restaurant confirmed, there is now some doubt whether the plan for a boutique adjoining this “Kitchen Calamity” will see reality, or if it could be built as a later phase. This was rumoured to be built in the workshop of the existing Imaginations (Costuming) backstage building, bordering the construction site. Hopefully sense will prevail because, if there’s one thing the park needs more than a dark ride or a restaurant… well, you get the idea.