Your Guide to Christmas 2015 at Disneyland Paris + 4 Brand New Videos! 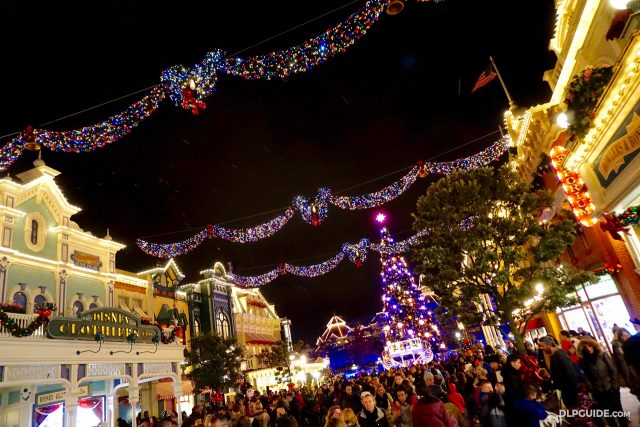 Since 7th November it’s “already Christmas at Disneyland Paris”! This year’s Disney’s Enchanted Christmas season runs until 7th January 2016, with its own parade, illumination ceremonies and nighttime castle spectacular, plus the return of a certain hit stage show from this summer. END_OF_DOCUMENT_TOKEN_TO_BE_REPLACED

Disneyland Paris launched its extended 20th Anniversary celebrations with a one-off catwalk fashion show to showcase brand new Disney character costumes made by some of Europe’s most prestigious fashion houses.

Titled ‘Designers of Dreams’, the one-off event took place on Saturday 23rd March for the 20th Anniversary Extended press launch. But luckily, if you’d like to see this unusual meeting of Disney characters and catwalk fashions for yourself, you can watch it here in full!

As well as exclusive outfits by fashion houses such as Lanvin, Sister by Sibling, Philip Treacy and Supertrash, the show featured a performance by Laura Van Kaam, winner of The Voice Kids Nederlands.

It’s here! Our complete, original 1080p HD video of the new Disney Dreams!, now updated for 2013 with new The Lion King and Brave scenes. This video also features our exclusive preview of Disney Light’Ears, set to launch at Disneyland Paris this July for €20. We filmed the video from directly in the middle of Central Plaza, and for the first time used a tripod to steady the camera — enjoy!

More news updates from the 20th Anniversary Extended launch to follow — in the meantime, please scroll back through our many live photo updates from the events on Twitter to get a great recap of all the action! Yesterday was a special day for character fans, as troublesome kittens Berlioz and Toulouse from “The Aristocats” made their first ever park appearance at Disneyland Paris. The pair joined sister Marie, who has been sighted rarely at the resort before, for a special photo shoot on Town Square and a brief parade event aboard the Main Street Omnibus.

Titled “Be my Valentine!”, the day’s events also included decorations around Town Square gazebo and numerous “rare” character appearances all around the park, captured here in pictures by @InsideDLParis, @DisneylandPFans and @DisneyMoi. Unusually, some characters were out as couples: Mickey and Minnie, Donald and Daisy, Woody and Jessie, Peter Pan and Wendy, Stitch and Angel… even Chip ‘n’ Dale vying for Clarice’s heart together. Even more unusual, there was a chance to see characters including Bernard and Bianca from “The Rescuers”, Phoebus and Esmeralda from “The Hunchback of Notre Dame” and, over at Walt Disney Studios Park, Chicken Little and Abbey Mallard (remember them?!).

Disneyland Paris never usually celebrates Valentine’s Day with this much effort, so it was great for them to do this for their guests, right? Well, yes, and also the certain Prince with deep pockets who was reportedly visiting… but still, we get to enjoy most of the events too, so let’s not complain. Like we all said about the fantastic 12th April 2012 events, which were again presented mostly for a visiting VIP party: this is simply how Disneyland should feel all year round, for all paying guests.

Watch a complete video of The Aristocats’ “Be my Valentine!” cavalcade… END_OF_DOCUMENT_TOKEN_TO_BE_REPLACED

If you’ve already enjoyed our video of the Disney Dreams! World Premiere, filmed from the middle of Central Plaza, then prepare for a whole new angle on the dreams. The next evening, for the show’s 1st April Opening Night and first two public performances, we waited with the eager crowds for almost an hour before the show began to grab a spot right on the front row.

Standing here, at the foot of the bridge to Sleeping Beauty Castle, the projections are clearer than ever, the pyrotechnics thrillingly close and the fountains towering overhead! And with the gasps and cheers of the larger crowd, our second complete 1080p HD video of the show gives you a whole different atmosphere with the 20th Anniversary nighttime spectacular, too. The view isn’t necessarily “better” than elsewhere, just different. That’s the beauty of this show: you get a great view from anywhere in front of the castle, and there’s space for around 15,000 people. It’s huge.

So sit back as we invite you there, to the Opening Night of Disney Dreams!.

Bright blue skies came out on 1st April for the first official public performance of Disney Magic on Parade!, which you can watch in our exclusive video right here. Just a day earlier, the special premiere performance had gone out under thick clouds with a sharp chill in the air as the “press event curse” struck again — that unwritten Disney park rule which means any major organised event will be struck by less-than-perfect weather.

This opening day performance was also thankfully missing the over-abundance of parade guards the previous day, almost overpowering the floats themselves. And if you’d have been there, you could have breathed in the scents of each float again, missing the day before; a unique feature of Disney’s Once Upon a Dream Parade which was thankfully revived just in time.

Donald Duck, rather than Tinker Bell, ended the parade on its first day, and it seems the two will continue to share the role depending on the fairy’s availability — no doubt being very busy with a certain nighttime spectacular right now.

After Disney Characters’ Express, Minnie’s Party Train and Disney All Stars Express, this is our fourth consecutive video of the character train rounding the corner of Main Street, U.S.A. beside Town Square. A popular annual tradition, or a daily nuisance? You be the judge of that. But, as Katy Harris confirmed in the 20th Anniversary roundtable discussion, it’s incredibly popular with regular guests, who “just love” being able to meet the characters in this way, which they normally only see fleetingly passing onboard parade floats. And this year, as you can see in our video above, the rumours were true: even Mickey is willing to get mobbed on Central Plaza, all in the name of the 20th Anniversary.

• Watch a video of the train’s official premiere arrival here.

When Disneyland Park re-opened its gates at 9.40pm on 31st March, a magical glow had already fallen upon the land. Stepping into Main Street, U.S.A., the twinkling new Main Street Station greeted invited guests — as did some extra-special invitees: the giant, illuminated World of Color pre-show puppets, brought over especially for the occasion! This video takes you to “A Night in Disneyland” for the 20th Anniversary Dedication Ceremony as if you were there.

Everything is included: from walking into Town Square, to the ceremony itself with Philippe Gas, footballer Zinedine Zidane and Mickey Mouse (at 10:00), to the epic, emotional walk up Main Street, U.S.A. prior to the Disney Dreams! World Premiere (at 16:00), when Cast Members from every land and every attraction lined the street to wave and cheer guests along with cries of “Joyeux Anniversaire!” as golden confetti in the shape of the number ’20’ rained from above. Truly an exceptional and unforgettable ending and beginning to these chapters in Disneyland Paris history.